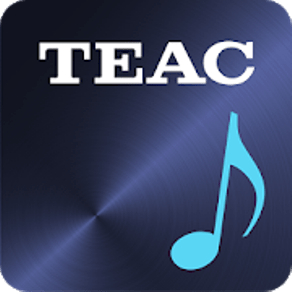 TEAC HR Audio Player is a high-quality music playback app that meets the requirements of music fans who want to enjoy music with high-quality audio even when using their smartphones by supporting playback of high-resolution formats.(*1) The function limitations of the app are unlocked by connecting a compatible TEAC USB-DAC(*2). This enables native playback3 of FLAC, DSD and other high-resolution formats. Using the high-precision equalizer, you can also play MP3, AAC and other standard formats with the audio characteristics you like.
The TEAC HR Audio Player Unlocker (paid app) is available to unlock the function limitations and enable native playback(*3) of FLAC, DSD and other high-resolution formats when using USB-DAC devices not made by TEAC.
*1 When using the headphone jack of an Android device to output playback, files with resolutions of PCM 88.2kHz and higher will be downsampled to 44.1kHz.
*2 The supported TEAC models are HA-P50, HA-P50SE, HA-P90SD and HA-P5 (as of July 2016).
*3 If the USB-DAC does not support the sampling rate of the playback file, it will be downconverted when being played.

The graphic equalizer allows up to 16,384 bands to be adjusted and up to 1000 equalizer curves to be saved and loaded. In addition, the linear-phase FIR filter prevents phase distortion and other audio quality degradation, allowing you to adjust the sound as you like without reducing the quality of the audio. By pinching to zoom the display, you can smoothly make precise equalization adjustments.

– When unlocked, files with resolutions of 88.2kHz and higher will be downsampled to 44.1kHz or 48kHz.
– Files that are protected by DRM cannot be played back.

– When outputting DSF, DSDIFF and other DSD formats using DoP, the equalizer and crossfade functions will be disabled. In addition, the frequency response will not be shown.

NOTE: Operation is not guaranteed with all devices.

Fixed the bug that causes the USB audio function to crash on Android 7.0 Nougat.